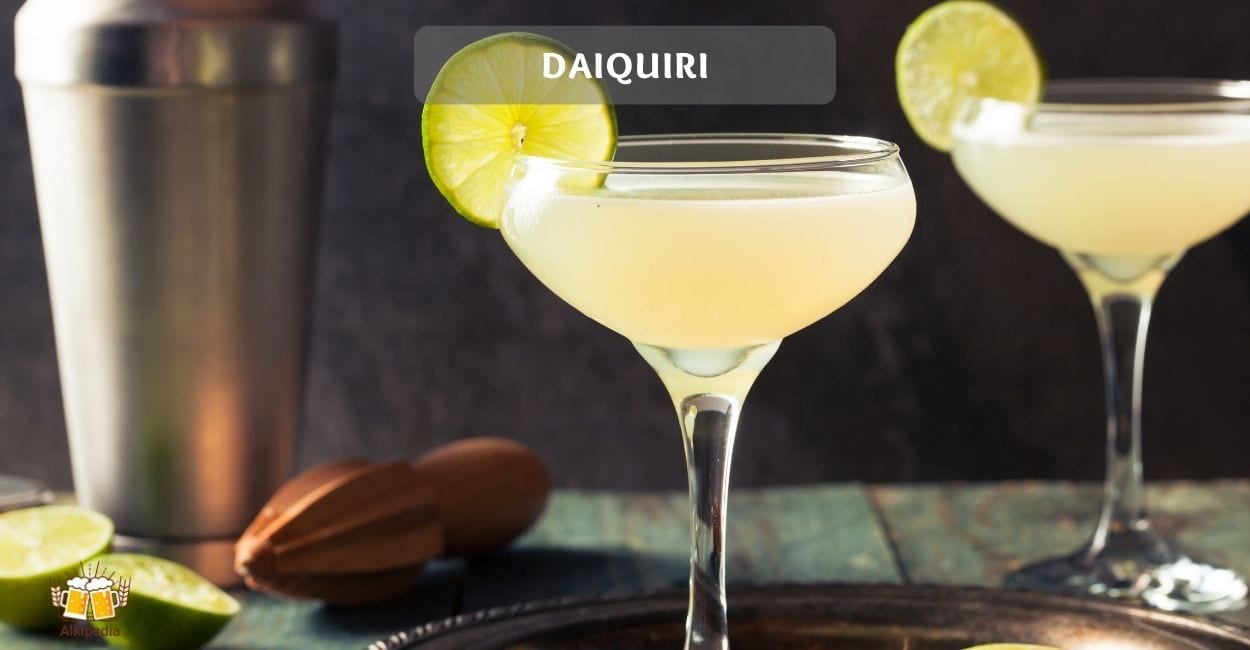 At first glance, the daiquiri seems plain and simple. But perhaps it’s this very manageable list of ingredients that makes this cocktail a real surprise. The classic short drink is served without frills in a pre-chilled coupette glass.

This drink is often used as an apéritif, but it’s also a popular spontaneous short drink. With its combination of spirits, lemon juice, and sugar, the Daiquiri belongs to the category of sours.

Similar to the ‘Mojito’, the Daiquiri also originated in Cuba, where the farmers of the sugar plantations already mixed rum with lime and sugar. The American writer and presumed diabetic Hemingway enjoyed his daily cocktail ‘Papa Doble’ in Cuba — a Daiquiri variation without sugar but twice as much rum.

Besides the basic classic cocktail recipe, there are now many other variations. The flavor already changes when the amount of rum, lime juice, and syrup is slightly altered. There are also more modern variations of the ‘frozen’ drinks with crushed ice and fruit pulp, which are very popular now. There is also a ‘basil’ version, where you add basil leaves to the shaker. 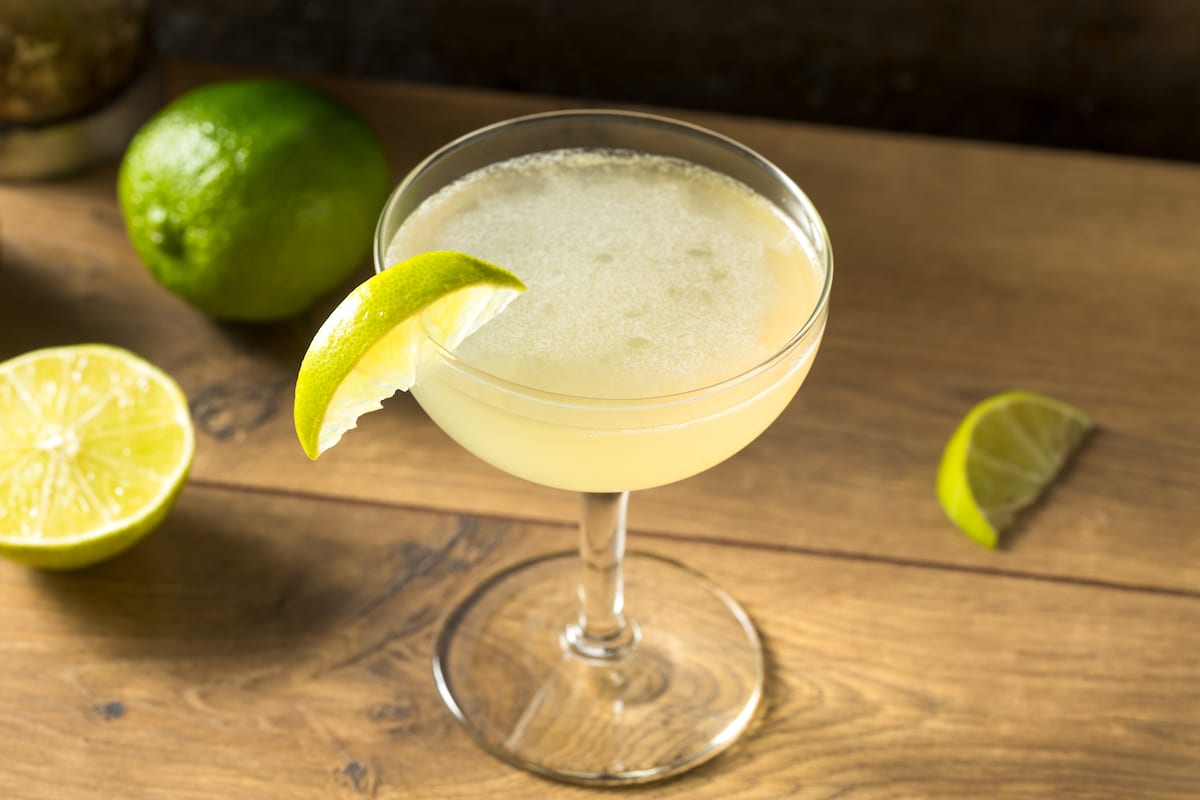 Serving: 1Cocktail | Calories: 24kcal | Carbohydrates: 3g | Protein: 1g | Fat: 1g | Sugar: 2g | Proof: 22.2% vol
Have you tried the cocktail?Share it with us on Instagram by tagging us! @Alcipedia or with the hashtag #Alcipedia!
Share on Facebook Share by e-mail

Popular variations of the daiquiri cocktail:

Depending on your preference, you can try other mixing ratios like 3-2-1 or 6-3-1.5. According to the International Bartenders Association IBA, the typical mixing ratio is 4.5 cl rum, 2.5 cl lime juice, and 1.5 cl sugar syrup.

My tips for the perfect drink:

Even if the preparation seems more than easy, it’s the little things that count.

Ingredient No.1 — Not all rum is the same

Because of its origin alone, Cuban rum should always be used. There are plenty of cheaper alternatives, but you should stay away from them for this drink. When looking at the ingredient ratios, it’s clear that the rum plays a big role here, which is why you should not save on it.

Equally important is the 2nd ingredient: lime juice. There is usually a lot of emphasis placed on squeezing it freshly, which is definitely not the case here. Fort an excellent daiquiri, you should squeeze the citrus juice 4-10 hours before use. Let the juice breathe, which causes the pH value to decrease. In turn, it will taste milder and less sour.

If you want to press the citrus juice out gently and with perfect flavor, you should use a ‘Mexican Elbow’. It gently squeezes out the juice with a kind of spoon and lets no pieces from the white middle get into the juice, which would make it more bitter.

You can of course just use a normal juicer and be extra gentle when squeezing the juice out.

Ingredient No. 3 — Homemade sugar syrup and the subtle difference

The last ingredient, the sugar syrup, also leaves room for customization. The commercial syrup sweetens the drink and balances out the acidity of the lime.

A Daiquiri lover will notice the subtle difference when they use homemade whole cane sugar syrup instead of syrup made from industrial sugar. This syrup is easy to prepare at home. All you need is cane sugar and water in a 2:1 ratio. Warm the mixture in a saucepan over medium heat, but never let it boil! Stir until the sugar has completely dissolved — et voilà. You’ll love the result!

The presentation of the daiquiri:

The Daiquiri should always be served in a well-chilled martini glass or coupette glass. Optionally, the glass can be garnished with a slice of lemon or lime zest, but there’s usually no decoration. Simple at its best!

And don’t forget: We are talking about a strong cocktail here, so the glass should not be too big!

History and famous followers of the daiquiri:

The widespread use of these ingredients and rum in combination with citrus juice by British sailors described as early as 1750, among other things, as a remedy for scurvy suggests that similar drinks were probably mixed earlier. But the name Daiquiri and its composition are said to have originated in Cuba in the early 1900s.

According to the most famous origin story of this drink, it was first served by an American mine engineer in an iron mine in the Daiquiri village, which gave it its name. This drink is said to have been introduced to New York bars shortly afterward by the mine’s owner, William A. Chanler. During Prohibition, many Americans emigrated to nearby Cuba, and this cocktail quickly became very popular there. During World War 2, rum imports to the U.S. were encouraged, and so the rum-mixed drinks formerly reserved for sailors gradually became the fashion there as well. Last but not least, it was also the favorite drink of John F. Kennedy.

The cocktail became particularly famous through the American writer Ernest Hemingway. During his time in Cuba, he supposedly had between 6-8 ‘Papa Doble’ every day for over 20 years in the bar ‘El Floridita’ — without sugar and with double rum. Even today, you can still sit next to Hemingway in the ‘Floridita’ and order the Hemingway cocktail — a bronze statue has adorned the favorite corner of the writer in the bar since 2003.

Due to Cuba’s tropical temperatures, ‘frozen’ drinks enjoyed great popularity and experienced a boom with the development of cooling technology. A drink that was a little too old-fashioned for the younger generation reinvented itself in ‘frozen’ form and became a popular drink in the 1980s and 1990s. The preparation of a frozen daiquiri is super easy! All the ingredients end up in a blender and get poured into the glass afterward, add a straw, and the summery drink is ready.

The use of crushed ice when blending gives the drink a fruit sorbet-like consistency. The usual ingredients added in this version are strawberry, mango, or banana, which are often supplemented with strawberry syrup or banana liqueur.

There are more unusual variations with fresh herbs such as mint, basil, or rosemary. The cocktail is then additionally filtered through a tea strainer at the end so that no residues contaminate the cocktail.

In the meantime, as ‘frozen’ drinks have become quite popular due to easier and faster production, the classic version has been somewhat forgotten.

Guidelines for the perfect cocktail

If these basic rules are followed, then a cocktail will always succeed. Only mix a maximum of three alcoholic ingredients, the glass used should not be too big, and always serve a good cocktail cold!

There will often be far too much ice used with big glasses, making the drink watery more quickly. You should also avoid pre-mixed products. A good drink takes time, just like a good meal.

Leon is a food blogger, nutritionist, and passionate cocktail nerd. He loves trying out new cocktails and sharing his creations. Jonas is also one of the founders and part of the editorial team of Alcipedia.com.
Mehr über: Leon Zeschke | Webseite
Post Tags: #Ice cubes#Lime juice#Rum#Sugar syrup
Share:   Facebook Whatsapp E-Mail