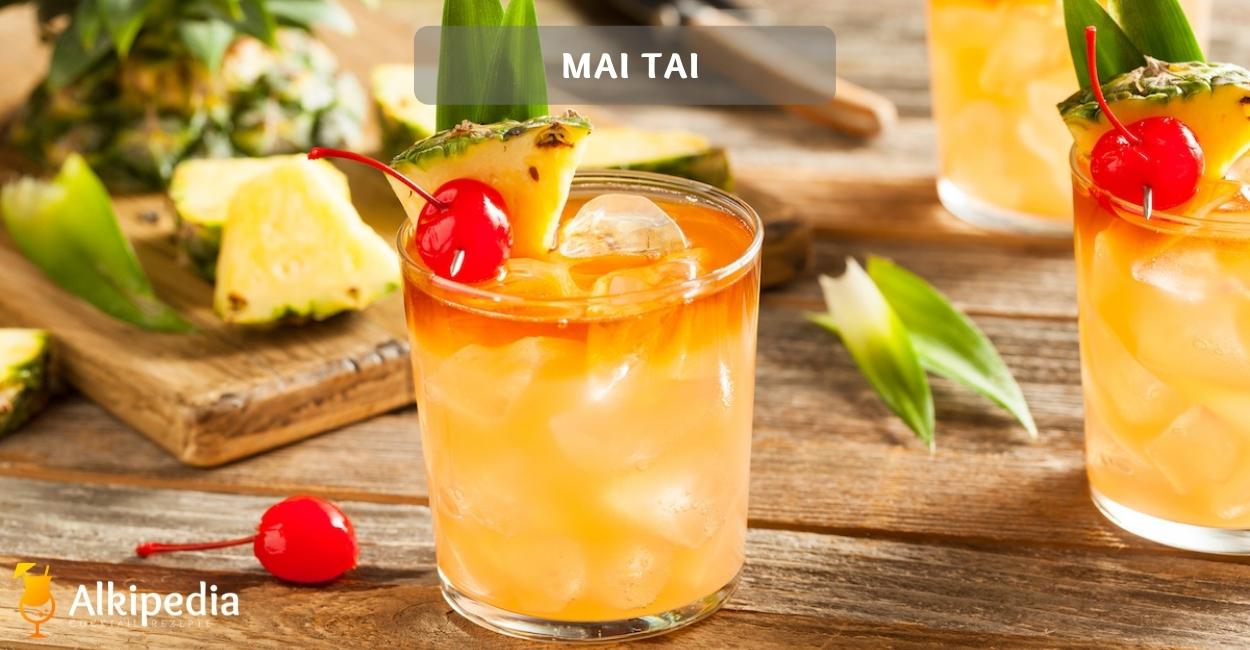 Young people, in particular, tend to go for the popular high-percentage drinks like Mai Tai, Zombie, or Long Island Iced Tea. They all have one thing in common: a high amount of alcohol, mixed in a way that you only begin to notice when your head starts spinning.

The Mai Tai in particular has a long history that goes back to the 1940s when it was created in a popular bar. We took a closer look at this traditional drink and cleared up old prejudices and hopefully helped to awaken a new love.

The recipe for a successful Mai Tai

There is, of course, Bergeron’s original recipe, but the 17-year-old rum he used back then is no longer available today. Opinions not only differ on the choice of rum but also on the other ingredients of the recipe. The otherwise simple but rich mix has a few pitfalls: Crushed ice or ice cubes? Grand Marnier or Triple sec? Fresh lime or concentrate? Almond syrup or almond liqueur?

These subtle nuances can make all the difference between a bland drink that only tastes like alcohol and the cocktail Mai Tai, which can really make an impression. We did the test and risked our livers and common sense. And now we will share the results with you.

The classic and test winner

The closest to the original is still the one from the inventor Victor J. Bergeron. We followed all the guidelines (except for the choice of rum) and got a fresh, slightly sweet drink as a result. So good that we, of course, had to toast the winner at the end. 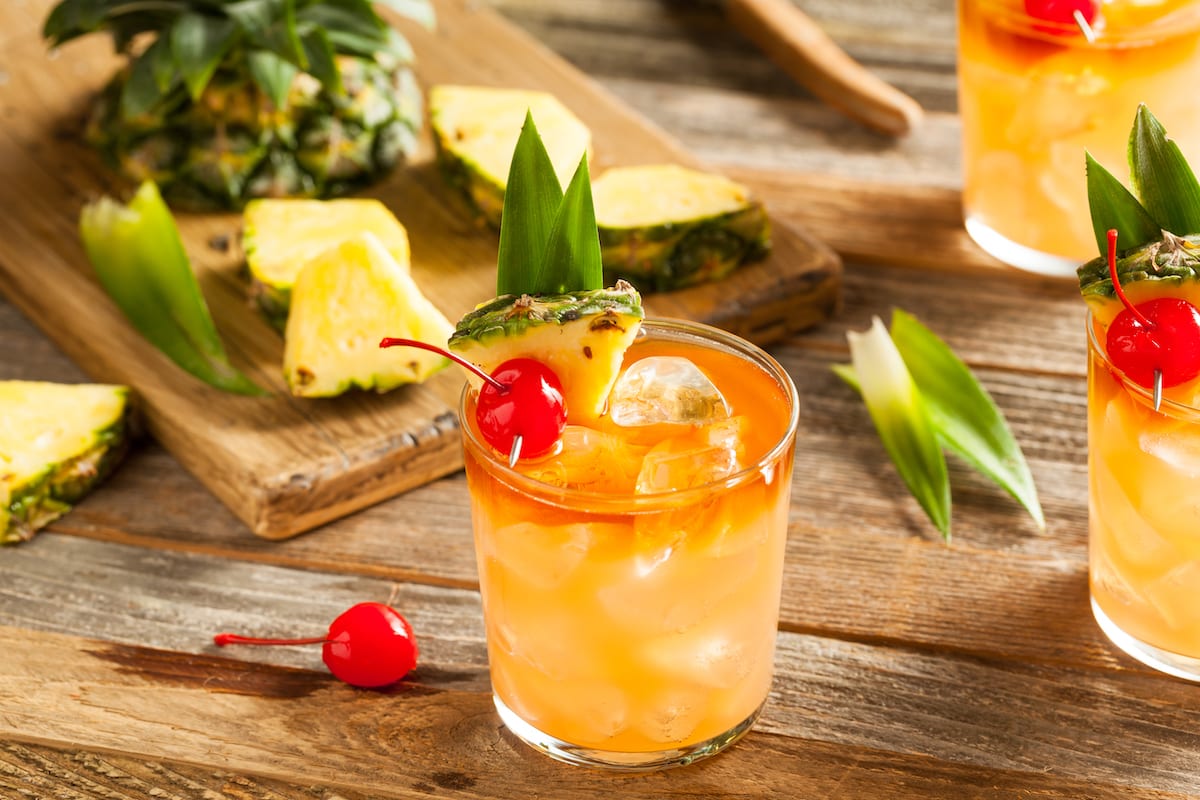 Little expert tip: Never hold the cocktail shaker at the middle. Always at the top and bottom. This keeps your hands warm and the drink cold.

Serving: 1Cocktail | Calories: 45kcal | Carbohydrates: 7g | Protein: 1g | Fat: 1g | Sugar: 5g | Proof: 22.9% vol
Have you tried the cocktail?Share it with us on Instagram by tagging us! @Alcipedia or with the hashtag #Alcipedia!
Share on Facebook Share by e-mail

The cocktail recipe in a bottle

If you want something that takes a little less effort, you can fall back on Trader Vic’s Mai Tai Cocktail Mix. You only need to add this, rum, and fresh lime to the shaker and then fill it with crushed ice. Otherwise, the method and garnish are the same.

There’s also a great selection of authentic tiki glasses and other useful professional home bar equipment you could use. Many rather lazy recipes resort to pineapple juice for the fruity flavor. However, this has little to do with the original Mai Tai recipe. The high sugar content of the pineapple juice also makes the alcohol reach your head faster, which can hurt the morning after.

The never-ending dispute over the true Mai Tai

“They’re a pathetic bunch of scoundrels for copying my drink. I hope they all get chickenpox!”

Those were the famous words of the inventor of the Mai Tai. There was a long legal dispute about the naming and the original recipe from Trader Vic. The famous cocktail, in contradiction to what many believe, has nothing to do with Thailand. It is not a spelling mistake where the bartender forgot the “h” in Thai. The fruity, sweet rum drink was born in California.

Legend has it that Victor Jules Bergeron created the Mai Tai cocktail in his bar and served it to some friends from Tahiti. His friends were so excited that Carrie Ham is said to have been overjoyed and chirped “Mai Tai Roa Ae!” meaning “This is out of this world!”. This was the reason for the owner, now known as Trader Vic, to name the new cocktail Mai Tai.

According to him, the idea for the Mai Tai was born out of a lack of good rum cocktails. The 1930s in America were marked by a fascination with all things exotic. Tiki bars were opened all over the country.

Tahiti or Hawaii were the main vacation destinations. The Hawaiian shirt was never missing at any BBQ party. Victor thought at that time that there should be a cocktail that has an exotic atmosphere but more to offer than a Daiquiri, and that is fitting for ladies and gentlemen alike.

In his cookbook, Victor J. Bergeron squared off with his biggest competitor for the title of the Tikki King. The businessman and adventurer nicknamed Donn Beach opened his first Beach Bomber Bar right after the end of Prohibition. He developed a drink that was very similar to the Mai Tai cocktail or at least had a very similar flavor profile.

Now that Victor was having a lot of success with his Mai Tai at his bar, Donn claimed the original recipe and added the Mai Tai Swizzle to his menu. While his wife confirmed that he had this drink on his menu much earlier than Victor, it wasn’t until the 1950s that it could be found on the menus of Beach Bomber Bars again.

This means it was first added to Donn’s menu 10 years after it was introduced on the Trader Vic’s Bar menu. This event infuriated Victor so much that he publicly commented on the theft of the recipe.

The above quotes are from the text of Victor’s published cookbook on exotic Pacific cooking recipes. The rough language shows the frustration and anger Victor felt due to the copies of his cocktail. While he was responsible for many other cocktails and recipes, the Mai Tai recipe is what keeps him on the Tiki throne even today.

The great comeback of the golden years

In Germany, the 50s and 60s are warmly remembered. People could finally afford things and go on vacation again. With the exotic Pacific islands’ touch of the Mai Tai, we too can bring a piece of the Caribbean into our living room or garden.

The early twenties were the epitome of opulence and elegance. Movies like “The Great Gatsby” have resurrected this glorious era. Today, people are swinging on the dance floor again with a Mai Tai. This Mai Tai, however, is not primarily about celebrity influence, but class and style.

The discredited cocktail with cheap rum and juice no longer has anything in common with the noble Mai Tai from the founding days. It’s time to celebrate the original Mai Tai again. Honor where honor is due!