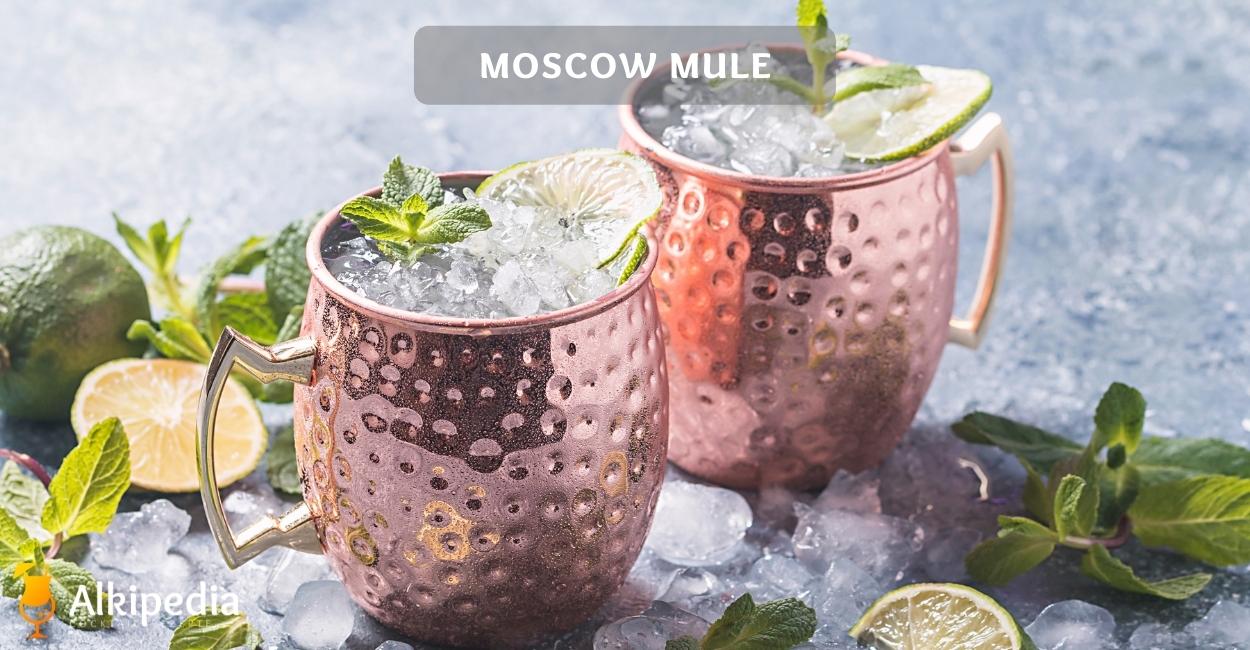 Moscow Mule — Everything about the ginger lemonade cocktail

What is the mule in this cocktail, and does it actually come from Moscow? The answer to the second question is a yes and no.

But no worries! In this article, we will tell you everything about the classic cocktail. Including the recipe, of course.

Origin of the Moscow Mule

The Moscow Mule or “Moscovian Mule” was created in the United States and contributed significantly to the following popularization of Smirnoff vodka.

The Smirnows, vodka distillers from Russia, had to leave the country during the October Revolution and then settled in Istanbul and later in Paris.

The brand was sold to American investors, and vodka soon became popular in the United States. “Mule” comes from the fact that the drink is refined with tangy ginger lemonade, which gives the whole thing a “kick” — just like a mule.

Ginger Beer — the lemonade with the misleading name

At the beginning of the 1940s, “Ginger Beer” was still completely unknown. This drink is by no means a type of beer but an alcohol-free lemonade with an intense ginger flavor.

Ginger beer became popular thanks to the Moscow Mule. Smirnoff manager John G. Martin did everything he could to popularize vodka in the United States. Together with Jack Morgan, the owner of a bar in Hollywood, he came up with the idea of ​​combining vodka and spicy ginger lemonade into a long drink.

Ginger beer was hardly available in Europe for a long time, so it had to be replaced by the milder ginger ale. It wasn’t until the turn of the millennium that Ginger Beer spread across the Old World and became a sensation in the cocktail scene.

The Moscow Mule is one of the so-called “Buck” drinks that contain ginger lemonade. It consists of one part vodka and two or three parts ginger beer.

Usually, the juice of a quarter lime is squeezed into the drink, which is then served on the rocks. Occasionally, a splash of an aromatic bitter is added to make the drink even spicier.

There are other variations of the Moscow Mule, such as the “Three Legged Mule” with whiskey or the “London Buck” with gin.

Moscow Mule Recipe: This is how you prepare the drink

Another reason for the Moscow Mule’s popularity is that it can be prepared in under a minute, and it’s hard to mess up the preparation.

The Moscow Mule consists of vodka, ginger beer, and lime juice. If you want, you can refine it with Angostura bitter or another aromatic bitter.

Serve it on the rocks in a copper mug and garnish with a lime wedge. 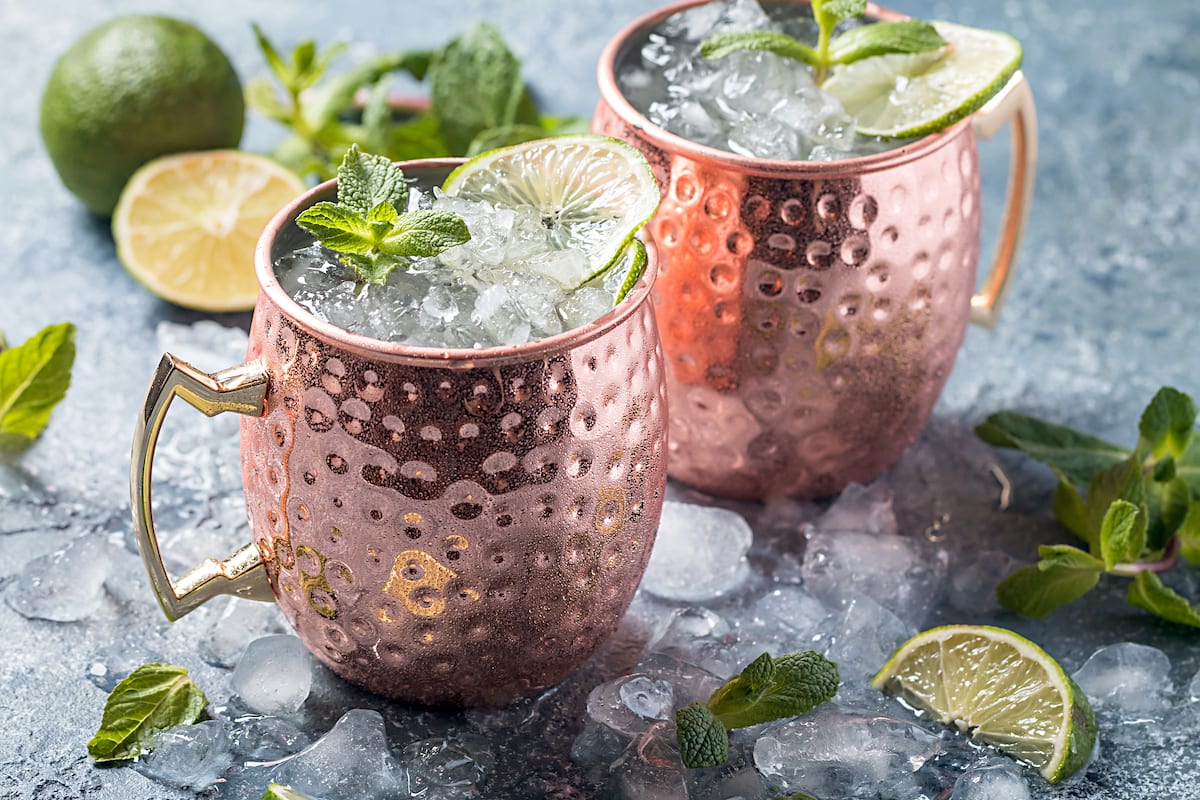 Serving: 1Cocktail | Calories: 262kcal | Carbohydrates: 30g | Protein: 1g | Fat: 1g | Sugar: 27g | Proof: 17.6% vol
Have you tried the cocktail?Share it with us on Instagram by tagging us! @Alcipedia or with the hashtag #Alcipedia!
Share on Facebook Share by e-mail

Tips for the perfect preparation of the Moscow Mule

As with every other drink, the mixing ratio plays a significant role in the preparation of the Moscow Mule. Usually, the recipe for the Moscow Mule calls for a mixing ratio of one part vodka to three parts ginger lemonade, but you can also mix the drink with a ratio of 1:2.

The right vodka for your Moscow Mule

As far as your choice of vodka goes, we have good news for you: you can’t really make a wrong decision. Although initially only Smirnoff vodka was used to prepare the drink, you can use any high-quality vodka.

It is much more important which ginger beer you choose because it’s responsible for the flavor of the drink and gives it its unmistakably spicy character. I would also recommend not squeezing the lime juice directly from the lime into the copper cup.

It is better to pour the juice into a lockable container first and let it sit there for a while. This allows the aroma to fully develop and makes the drink taste much better. Measure out 3 cl of lime juice during preparation and add it to the vodka.

It’s best to use a Jigger for this before you pour it into the copper cup.

The right ginger beer for your Moscow Mule

It’s only important that you do not confuse ginger beer with ginger ale. But you also have various options when choosing ginger beer. You can experiment with several varieties to find the perfect mix.

And if you take Aquavit, the result is an “Oslo Mule”. The essential ingredient in each of these mule drinks is still ginger beer.

The most frequently asked questions about the Moscow Mule

Why is the Moscow Mule served in copper mugs?

The Moscow Mule is traditionally served in a copper mug. Not because it positively affects the flavor of the drink, but rather comes from the fact that the inventor of the ginger lemonade stole a copper mug from his girlfriend’s shop.

The copper cup does not have any outstanding properties that would make it any different from a regular long drink glass. Since the Moscow Mule is a long drink, it should also be served in a suitable glass. If you don’t have any copper mugs lying around, long drink glasses should work too.

Is ginger ale the same as ginger beer?

Ginger ale and ginger beer are both ginger lemonades, but their flavor is different. Ginger Ale is a carbonated soft drink and comparatively mild.

If you were to use it to prepare your Moscow Mule, it would not create the expected flavor. That’s why you should only use ginger beer.

Is Spicy Ginger the same as Ginger Beer?

As already said, Ginger Beer has only recently settled in Europe and therefore also in Germany, of course. We owe it mainly to the popularity of the Moscow Mule that ginger lemonade is now also made in Germany.

The “Spicy Ginger” from the Berlin company Thomas Henry works perfect for the Moscow Mule and is particularly spicy with a light citrus aroma. With the Spicy Ginger, your Moscow Mule is sure to be an absolute hit.

Spicy Ginger also works well with other mule variations with gin, rum, or schnapps and gives every cocktail a wonderful spicy flavor.

What does mule mean in the cocktail world?

The Moscow Mule got its name because of the ginger lemonade. The ginger beer gives the drink a kick, just like a mule would.

The choice of words also creates an alliteration, which makes the name more memorable. The Moscow Mule belongs to the Buck category and is their best-known representative.

Because of the Moscow Mule, the Bucks are sometimes referred to as Mules. Bucks or Mules are long drinks that consist of a spirit, ginger lemonade, and lemon or lime juice. Depending on the Buck drink, you can mix it with whiskey, bourbon, gin, or rum.