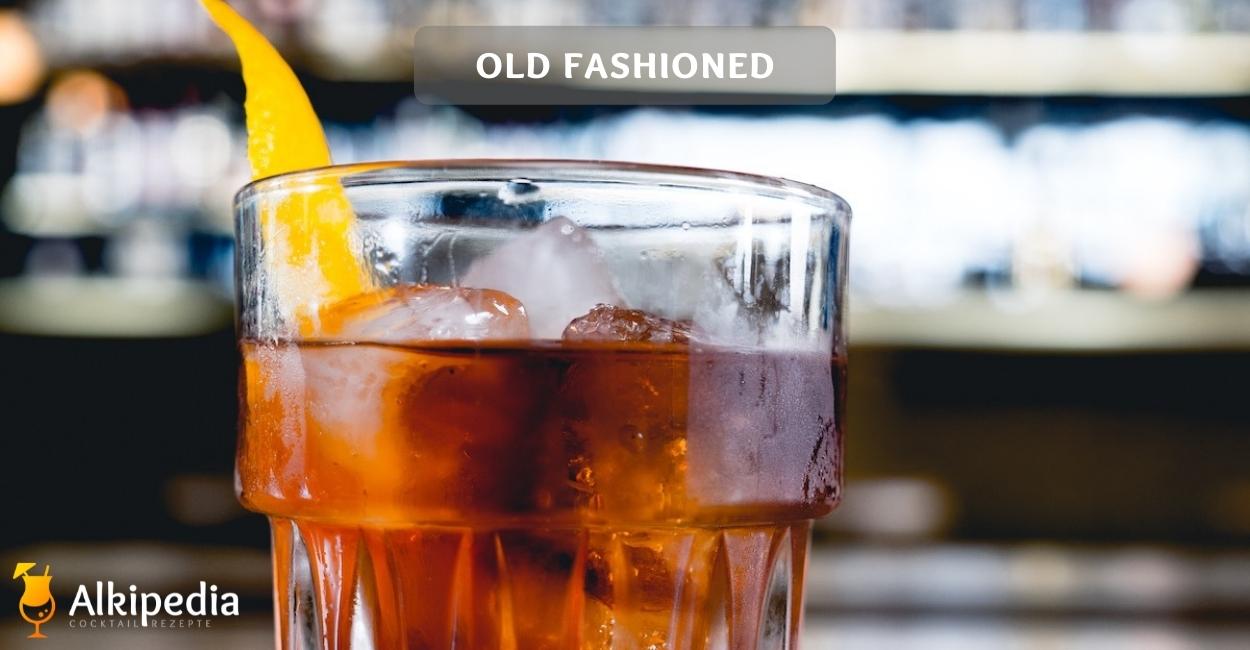 Old Fashioned — The forefather of all cocktails

The Name of the Old Fashioned is quite fitting. In fact, this cocktail is, so to speak, the bedrock of long drinks. It consists of spirit, ice, cocktail bitters, and sugar.

Usually, whiskey or bourbon is used, but there are variations with other spirits. Although it is actually quite easy to mix, you can make a lot of mistakes when preparing this cocktail.

The story behind the cocktail

Although it is considered one of the first, if not the first, cocktails today, there was still a predecessor to the Old Fashioned. It was called the Whiskey Cocktail and was a prime example of what was considered to be a cocktail back in the 19th century. What distinguished the whiskey cocktail from other drinks, the traditional slings, was the use of cocktail bitters.

The origin of the Old Fashioned

Where the Old Fashioned comes from and who exactly invented it remains a mystery. On one hand, there’s some evidence that the bartender Jerry Thomas mixed the drink around 1860 and garnished it with lemon zest — probably to get rid of an otherwise undrinkable whiskey.

On the other hand, there’s another story circulating: At the Perennis Club in Louisville in the state of Kentucky, a bartender is said to have served a General James E. Pepper an Old Fashioned for the first time.

After Prohibition, which ended in 1933, most people switched to bourbon. Even today, the Old Fashioned is mainly prepared with bourbon, but you can also use whiskey. 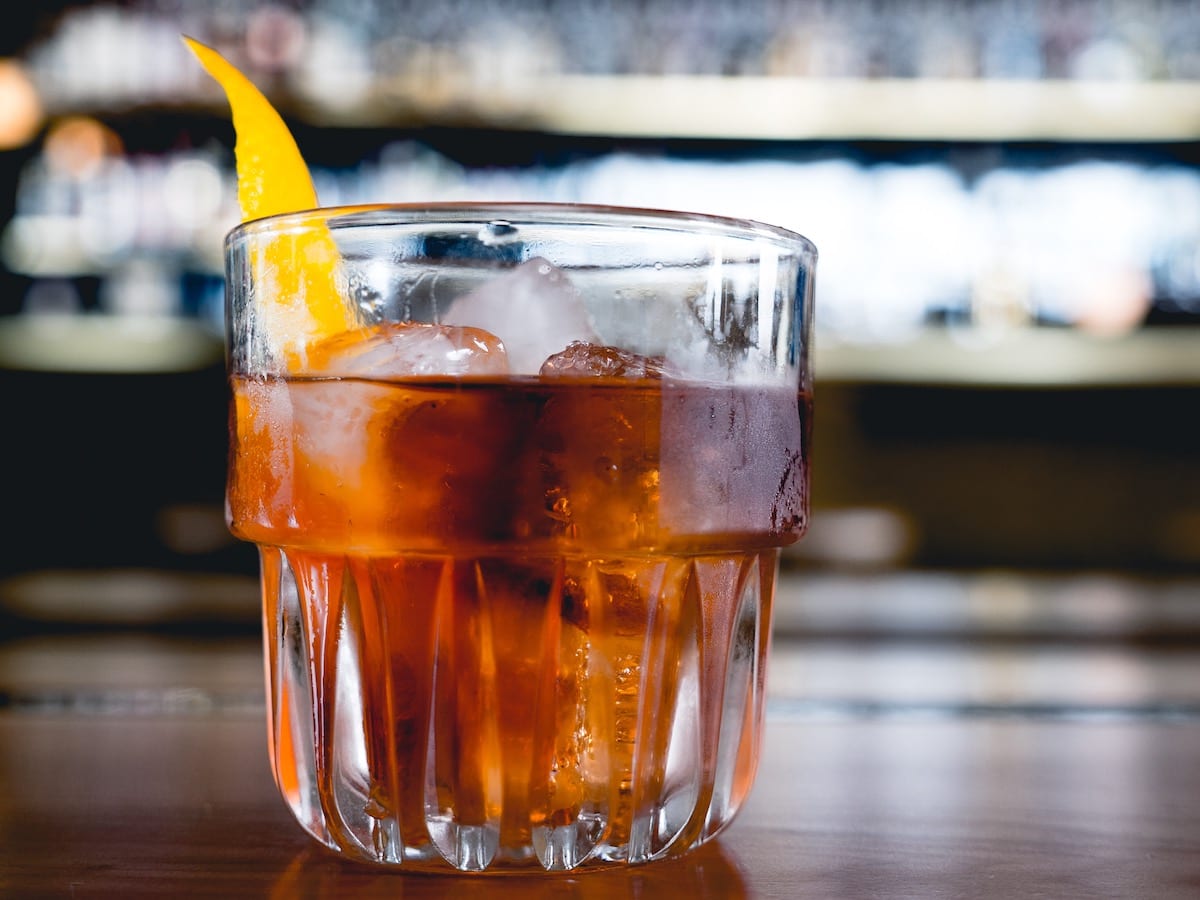 Serving: 1Cocktail | Calories: 152kcal | Carbohydrates: 8g | Protein: 1g | Fat: 1g | Sugar: 6g | Proof: 39% vol
Have you tried the cocktail?Share it with us on Instagram by tagging us! @Alcipedia or with the hashtag #Alcipedia!
Share on Facebook Share by e-mail

Tips for the perfect Old Fashioned

The Old Fashioned consists of about 80% bourbon or whiskey. The job of the remaining ingredients is to bring out the flavor of the spirit. This is why you should pay attention when choosing whiskey or bourbon.

Try the whiskey or bourbon first on the rocks (on ice). If you like the flavor, it can also be added to the Old Fashioned.

The recipe for the Old Fashioned calls for water. However, you only use a bit of it to dissolve the sugar with the bitters. Since ice cubes will be added later, the cocktail will be diluted anyway — so it doesn’t make sense to use more water.

Occasionally, bars will place a pitcher of water on the table, that way the guests can decide for themselves how strong they want their Old Fashioned.

When preparing the Old Fashioned, the final question is whether to garnish it with a cherry or an orange slice. This question is enough to cause a heated argument among bartenders. After all, everyone has their theory on how the drink is served best.

In truth, the Old Fashioned comes without any fruity garnish. However, you can try different variations until you find your sweet spot.

Many cocktail fans go the easy route and use sugar syrup instead of a sugar cube. This makes no difference in flavor. But you have to be careful with the sugar syrup: If you use too much, the cocktail becomes unbearably sweet. Beginners often miss out on the crunch that results from using a sugar cube.

The Old Fashioned is served, how could it be otherwise, in an old-fashioned glass, which is a classic tumbler.

Which whiskey is suitable for the preparation of the Old Fashioned?

Bourbon or whiskey? This question is redundant because bourbon is also a kind of whiskey. But unlike the traditional whiskey from Ireland and Scotland, which is made from barley or rye, bourbon is primarily made from corn.

Bourbon is synonymous with the southern states. First and foremost, one thinks of Kentucky, where the largest and most famous bourbon distilleries are still located today.

The Old Fashioned with bourbon is considered to be the standard version. But you can also mix the drink with a classic Scotch or a Rye Whiskey. Smoky whiskeys are particularly harmonious with the Old Fashioned. If you use rye whiskey, the rye forms a wonderful combination with the Angostura and gives the cocktail a spicy note.

Angostura is a bitter liqueur used as a seasoning ingredient in various cocktails. It consists of gentian root, bitter orange, cloves, cinnamon, cardamom, and cinchona bark.

Angostura was created by the German doctor Johann Gottlieb Benjamin Siegert. He developed the spicy liqueur and initially intended it to be a tonic for the South American freedom fighter Simon Bolivar. Angostura proved to be of better use in cocktails than as a herbal tonic.

With an alcohol content of almost 45%, Angostura belongs to the strong bitters. Nevertheless, the liqueur was not banned during Prohibition in the United States, as it can only be used as a condiment due to its bitter taste.

Compared to the whiskey varieties common in this country, bourbon is relatively mild. After production, the Southern whiskey is stored in special barrels made of American white oak.

It is precisely these oak barrels that have a lasting influence on the taste of bourbon. Depending on the type of wood, aromas such as vanilla, caramel, or coconut can be tasted in the finished product.

The mash also plays an important role. Bourbons, which mainly consist of corn, taste rather sweet. But the taste of bourbons that contain a high proportion of rye is slightly spicy.

Leon is a food blogger, nutritionist, and passionate cocktail nerd. He loves trying out new cocktails and sharing his creations. Jonas is also one of the founders and part of the editorial team of Alcipedia.com.
Mehr über: Leon Zeschke | Webseite
Post Tags: #Angostura#Orange#Sugar cube#Water#Whiskey
Share:   Facebook Whatsapp E-Mail