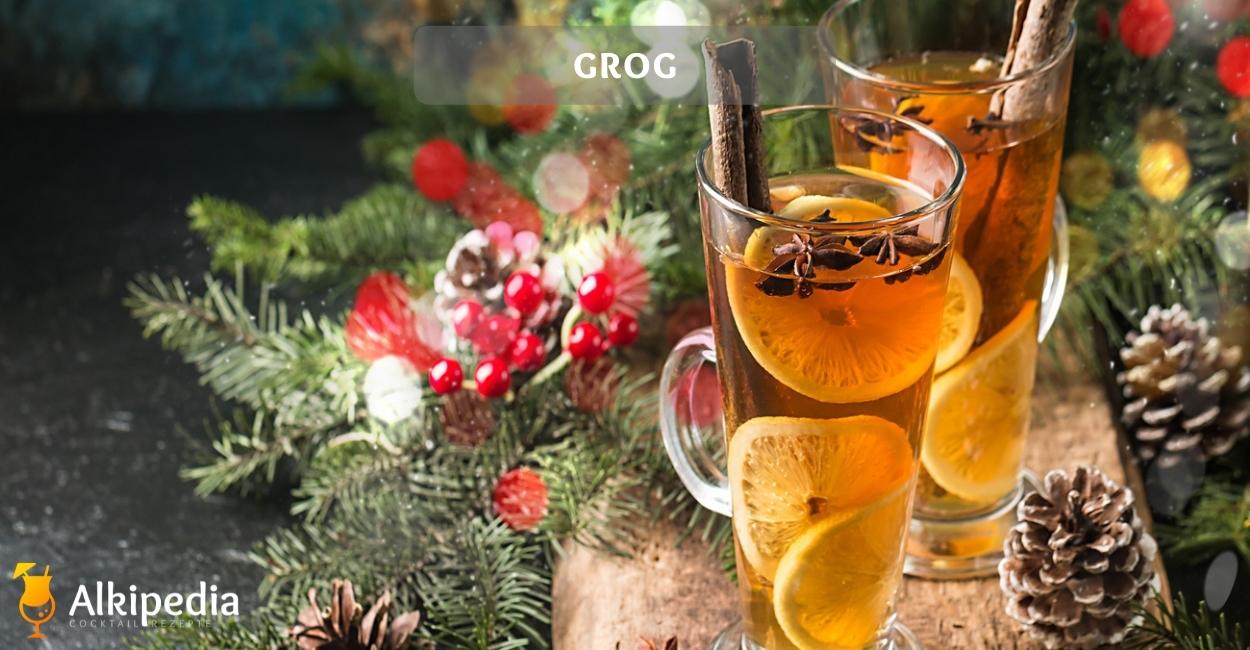 Fitting for the cold season, I introduce you to Grog and show you how to prepare it today. Grog is one of the most popular cocktails in the winter. The traditionally served hot drink warms you up from the inside.

The mixed drink couldn’t be easier to prepare by yourself, because it only consists of three ingredients. Two of these are water and sugar, which everyone should have at home. Add rum, the third ingredient, and you already have everything you need.

Where does the Grog come from?

Believe it or not, pirates drank this cocktail back in the 17th century in the Caribbean. Back then, it was always served in bars that were frequented by pirates.

This cocktail was also extremely popular in the 18th century. Many sailors received a glass of rum every day. This, of course, had an impact on the crew’s ability to work.

Rum was added to the drinking water on the ship to prevent it from spoiling for as long as possible. So all the sailors drank their water with a shot of rum. The drink was named after the Vice-Admiral of the crew.

Many years later, however, Grog is mainly served warm. That was not the case with the pirates and sailors. Grog only became popular and known in Germany at the beginning of the 19th century.

5 from 1 vote
On cold winter days, you want a drink that is both warm and tasty. The Grog is exactly that! Quick and easy to prepare, this cocktail is ideal for all winter parties. Only a few ingredients are necessary for a delicious sip of this drink.
Print Save for later
Preparation time: 2 minutes
Mixing time: 3 minutes
Total time: 5 minutes
Category: Hot drink, Punch
Origin: Caribbean
Keywords: Brown sugar, Rum, Water
Servings: 1 Cocktail
Calories: 161kcal
Author: Leon Zeschke

Serving: 1Cocktail | Calories: 161kcal | Carbohydrates: 12g | Protein: 1g | Sugar: 12g | Proof: 10.8% vol
Have you tried the cocktail?Share it with us on Instagram by tagging us! @Alcipedia or with the hashtag #Alcipedia!
Share on Facebook Share by e-mail

Tips for preparing the Grog

You can vary the amounts of the three ingredients a little. This drink was already available in a wide variety of strengths and proportions, hundreds of years ago. It is up to you to find out your ideal mixture.

Since it is such a simple drink, many make the mistake of using ingredients that are too cheap and inferior. If you only have three ingredients, you should make sure that you focus on quality here. The choice of rum is particularly important, as it is only diluted with water.

Many people also mix their Grog with black tea instead of plain water. If you prefer an alcohol-free drink, you can leave out the rum and simply enjoy a cup of tea or a spiced fruit punch. They keep you warm just as well.

The most frequently asked questions about Grog

Is a Grog good against a cold?

No, this cocktail is not recommended for people with colds. It can make you feel warm through vasodilation, but it doesn’t actually keep you warm. The increased blood flow which is caused by alcohol causes a loss of heat through the body’s surface.

What is the best rum for a grog?

A strong rum works best for this drink. The Jamaican rum is perfect for this. A bit of alcohol loss due to the heat won’t affect this rum.

When do you drink grog?

Grog is most popular in the winter months. In addition to hunter’s tea and punch, this drink is one of the Christmas market classics. In some regions, however, the drink is served all year round, especially in the north around Flensburg.

Leon is a food blogger, nutritionist, and passionate cocktail nerd. He loves trying out new cocktails and sharing his creations. Jonas is also one of the founders and part of the editorial team of Alcipedia.com.
Mehr über: Leon Zeschke | Webseite
Post Tags: #Brown sugar#Rum#Water
Share:   Facebook Whatsapp E-Mail