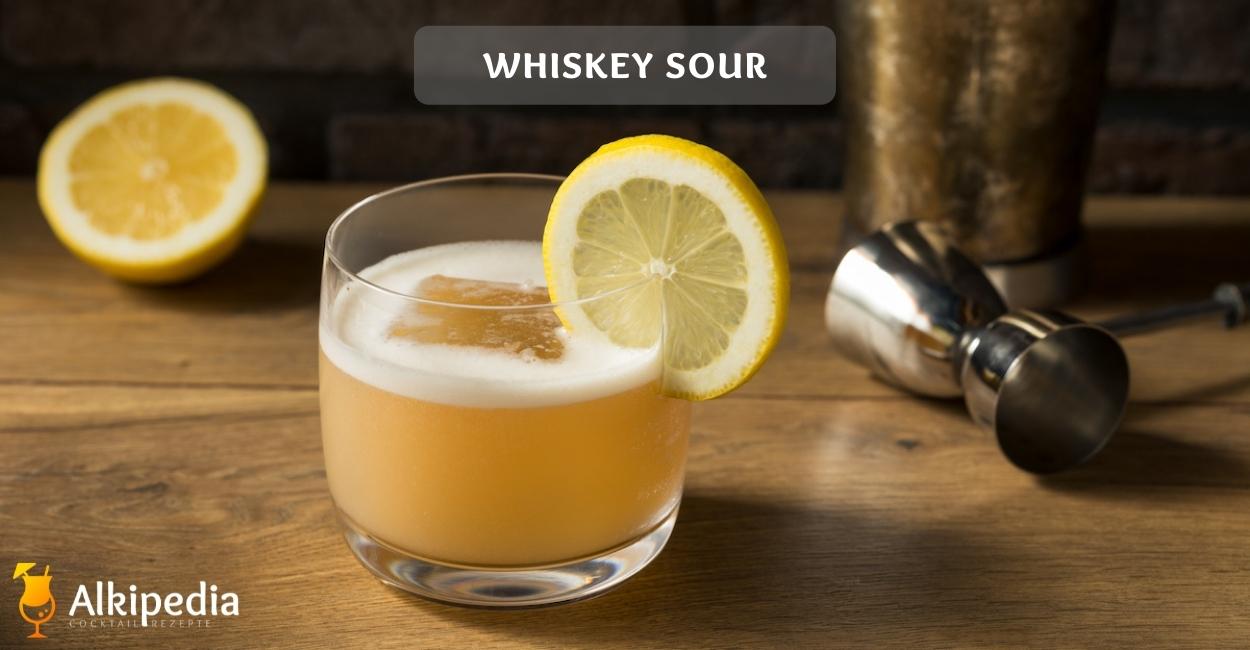 Forget gin tonic and beer because here comes the king of drinks: The Whiskey Sour. We tell you how to prepare this legendary cocktail correctly and make your next cocktail party an unforgettable evening for you and your friends.

Where does the whiskey sour come from?

The history of the Whiskey Sour goes back to the year 1862. Among many experts, the American Jerry Thomas is considered to be the inventor of the Whiskey Sour. He was tired of the hard work, gold-digging during the California gold rush, and decided to work behind the bar from now on.

In the same year, by the way, he published his first book: “How to Mix Drinks”. A work filled with cocktail recipes that were quite new and modern for the time.

Among these recipes was the first time the Whiskey Sour was mentioned, except that at that time it was still a Brandy Sour and contained brandy as the main ingredient instead of whiskey.

The origin of the Whiskey Sour

The inspiration for the initial Brandy Sour was the similar drink Brandy Fix, replacing the fruit with a slice of lemon for the Brandy Sour. The minimalist look of the drink was born. It was easily prepared and served on ice in a whiskey glass.

Thomas further developed this drink into a whiskey cocktail. He mixed gomme syrup, Boker’s Bitters, whiskey, and lemon on ice and served it straight up in a cocktail glass.

Gomme syrup is derived from the word gum and describes a syrup that is still used today to sweeten cocktails. It also adds texture to the drink, as the name might suggest. Boker’s Bitters can be found in almost every cocktail recipe in Jerry Thomas’ book.

This is a special brand that distributes bitters. All of these ingredients form the core of today’s well-known Whiskey Sour: A spirit with high alcohol content, lemon for the namesake sour component, bitters for the distinctive spice, and ice.

Since America was in the midst of the American Civil War at the time of the Whiskey Sour invention, heavily armed simple men loitered around in the bars, and they were only paying attention to one thing when drinking: it must be able to be downed as quickly as possible. The whiskey sour with no-frills was just right for that.

The first breakthrough of the Sour Cocktail

However, the whiskey sour only had its breakthrough at the end of the 19th century. Which was where it was served in the most diverse variations and thus modified into even more adventurous creations. Some serve the whiskey sour with half a lemon, optionally also lime, and a homemade shot of syrup from soda water and sugar.

Further variations are being developed

Others use, in addition to the lemon half, a teaspoon of pure sugar and rye whiskey and serve it as a whiskey punch. One version even manages to do without sugar and serves the whiskey sour with half a lemon shook in rye whiskey without ice.

This brew is topped up with soda water and also served without ice. There are earlier variations in which only the juice of a whole lemon is used and mixed with sugar and a sherry glass full of whiskey.

But this version is also still infused with soda water. This changed when, in a 1917 variation, the soda water was left out entirely. Instead, the drink was mixed with the juice of half a lemon, a teaspoon of powdered sugar, and rye or bourbon whiskey. Soda water could still be added afterward, according to preference.

This is now often replaced by mineral water. Soda and mineral water should not be confused because they are two different types of drinks. While mineral water naturally contains minerals, soda water, like regular tap or groundwater, is only subsequently enriched with minerals, typically carbonic acid.

The history of the Whiskey Sour

What stands out in the history of the Whiskey Sour is that it was made with either Rye or Bourbon Whiskey. Soda water also played a big role on the ingredient list for a long time.

What steadily evolved and ultimately gave the drink its name was the proportion of lemon juice. In a version from 1937, a quarter of the cocktail already consisted of lemon juice. The sugar content also had to be perfected over the years. For a long time, the Whiskey Sour was more like a slightly alcoholic lemonade than a proper drink.

Today it’s gone back to the original and sugar is used rather sparingly. What remains is the unique flavorful combination of a strong whiskey and a pleasantly sour aroma.

What types of whiskey should be used to make the Whiskey Sour?

First things first: To mix a good drink, you should never skimp on the ingredients. If you go for cheap whiskey from the discount store, you will be disappointed. The flavor of a successful cocktail always depends on the choice of the individual ingredients. Choosing from the medium-priced varieties would be ideal.

Here, the whiskey may cost up to 30 euros. A good bourbon or rye whiskey is the best prerequisite to turn your Whiskey Sour into a taste explosion. If you prefer a weaker drink, for example, you should pay attention to the alcohol content.

Remember: less is more! If you don’t have any experience mixing a whiskey sour, you should go for a whiskey with a lower alcohol percentage. After all, you can always add to it later.

It also plays a role whether you prefer a spicy or sweet flavor. Take a close look at the bottle before you buy it. Which type of flavor the whiskey has, is usually written on the label.

I recommend a good bourbon whiskey with a sweet flavor. It adds a certain sweetness to the drink and works perfectly with the other ingredients due to its subtle flavor. 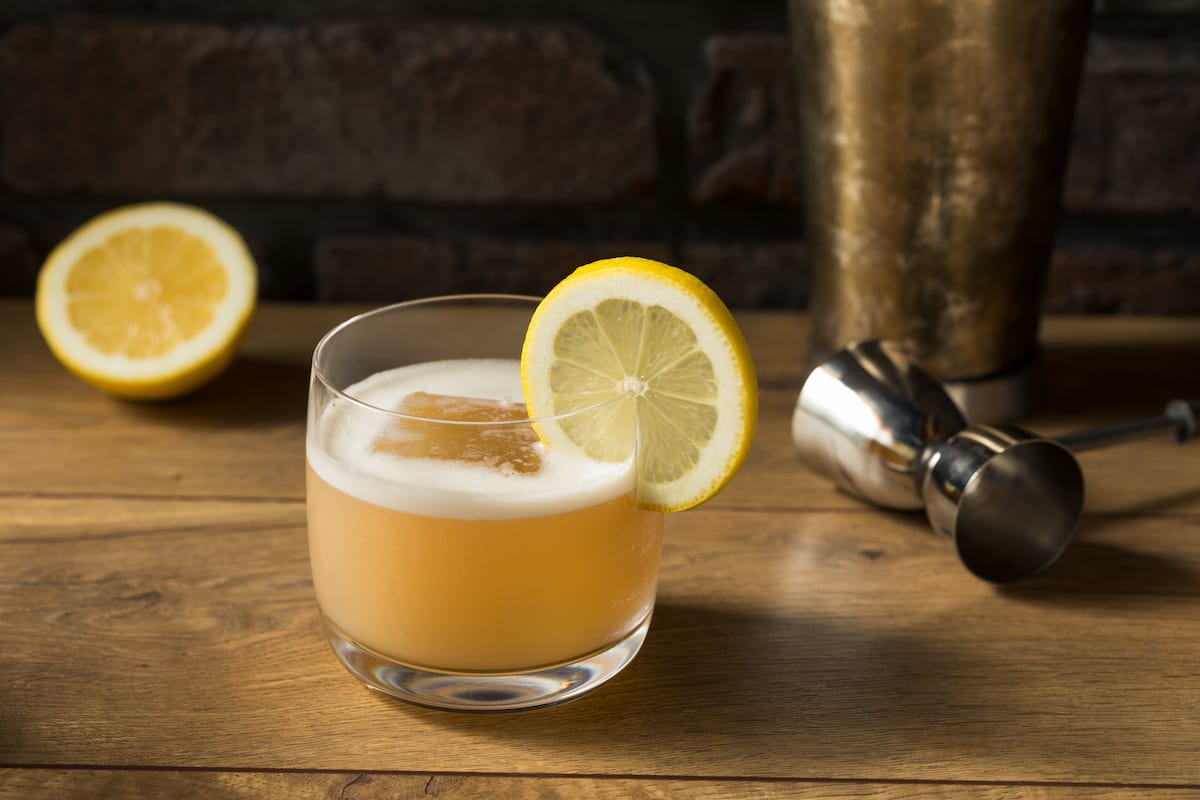 Serving: 1Cocktail | Calories: 52kcal | Carbohydrates: 11g | Protein: 1g | Fat: 1g | Sugar: 11g | Proof: 20% vol
Have you tried the cocktail?Share it with us on Instagram by tagging us! @Alcipedia or with the hashtag #Alcipedia!
Share on Facebook Share by e-mail

Now, we will answer a few frequently asked questions about mixing the legendary cocktail.

What whiskey do I use for this cocktail?

As already mentioned above, you should use your personal preferences as a guideline: Should the drink be stronger or mild? We generally recommend a mild, medium-priced bourbon whiskey with a sweet flavor and about 40% alc/vol. It’s not too strong and is ideal for whiskey newcomers.

Why do some serve this cocktail with egg whites?

This is absolutely a matter of preference. Many people add liquid egg whites to make the texture of the drink a little thicker and more substantial. Not everyone finds this appetizing. Vegans can fall back on Gomme syrup, for example, which has a similar effect and also adds sweetness to the cocktail.

What else can you mix with whiskey?

Many ingredients harmonize with whiskey. Many people use plain soda water or cola, for example. Juices, like orange juice, also work well with whiskey. The citrus flavor of the juice accentuates the fruity aroma of the whiskey. There are no limits to the imagination.

What is a whiskey net?

This is more due to the chemical reactions. If you mix whiskey with water, droplets, so-called micelles, are created. They have a water-repellent interior and float on top of the whiskey-water mixture as small, drop-like structures which look like a net.

These droplets show the quality of the whiskey: the higher the water content of the whiskey, the more micelles are formed. This way, you can tell quickly whether you’re holding an original American spirit in your hand or a watered-down version.