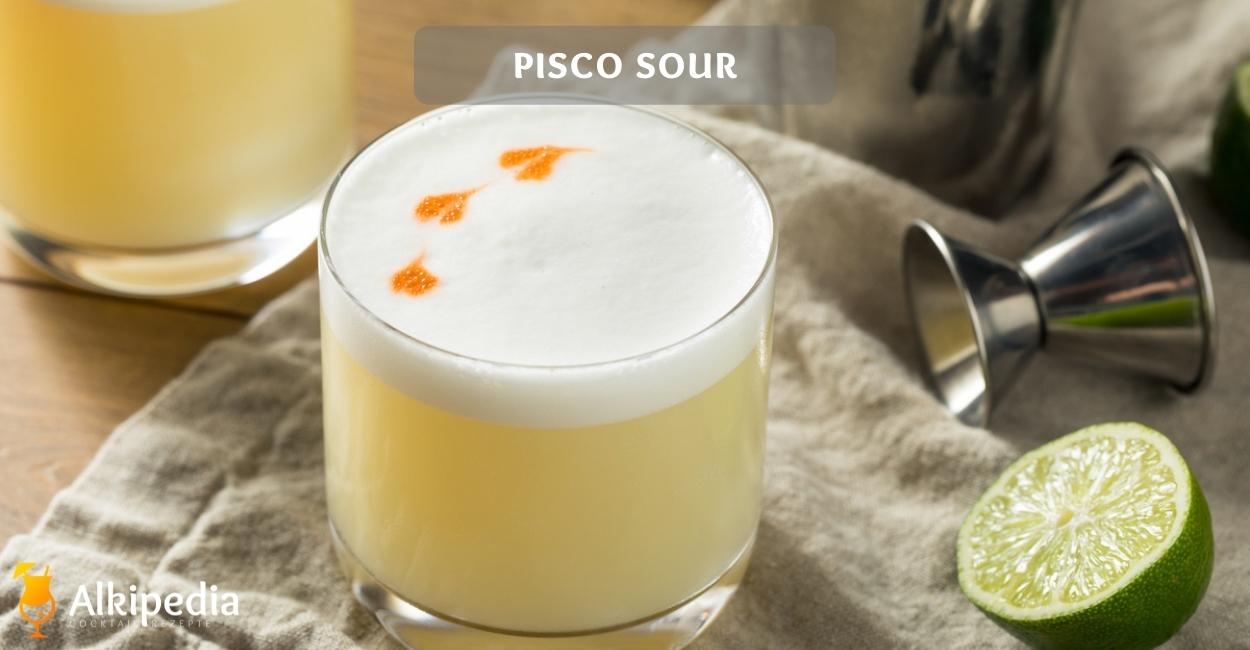 The Pisco Sour has a Peruvian atmosphere. The base of the cocktail is the Chilean and Peruvian national drink Pisco. Pisco is a grape spirit made from grape must.

Adding to the spirit are the classic ingredients for a sour cocktail: lime juice and sugar syrup. The sophistication of the flavors and consistency comes from an egg white topping with a splash of bitters.

The International Bartenders Association counts the Pisco Sour as one of the Contemporary Classics. Since 2004, the Día Nacional del Pisco Sour in Peru has been a celebration day for the drink. It is held every year on the first Saturday in February.

Even though enthusiasts claim that the Pisco will eventually get the same recognition in Europe as, for example, gin: The Pisco Sour is still not available in every bar.

How and where did the Pisco Sour originate?

The Pisco Sour is a cocktail whose origin is claimed by Chile and Peru. But it is much more pleasant to enjoy this drink without discussions regarding its origin.

Who invented the Pisco Sour?

Basic knowledge about the history of the cocktail is that it appeared in bars in the 1920s. A travel guide to Lima showed an advertisement for the “Bar Morris”, which mentioned the Pisco Sour as a drink. The bar owner Victor Morris is considered to be the inventor of the cocktail.

Why use whiskey in a sour when the country has Pisco?

Many consider this thought to be the reason behind the creation of the drink. Some Pisco producers point out that Victor Morris served the Pisco Sour earlier at the inauguration of a railway line in 1904. Supposedly, it was because there was not enough whiskey for the celebration.

In Chile, enthusiasts and producers like to point out that Elliot Stubb invented the Pisco Sour much earlier. This claim cannot be confirmed by evidence.

Pisco is the national drink of both countries. There were negotiations in court about what is allowed to call itself Pisco. When it comes to the import into the EU, Pisco is seen as a protected term that refers to the origin from Peru or Chile.

In Peru, this name is only allowed for spirits that are produced in five defined regions. There are also regulations for the production, such as a lack of colorants and artificial aromas. As if that was not enough, Pisco is also not allowed to mature in wooden barrels, and only eight grape varieties can be used in production. The grape and the distillation determine the flavor of the Pisco and the cocktail. 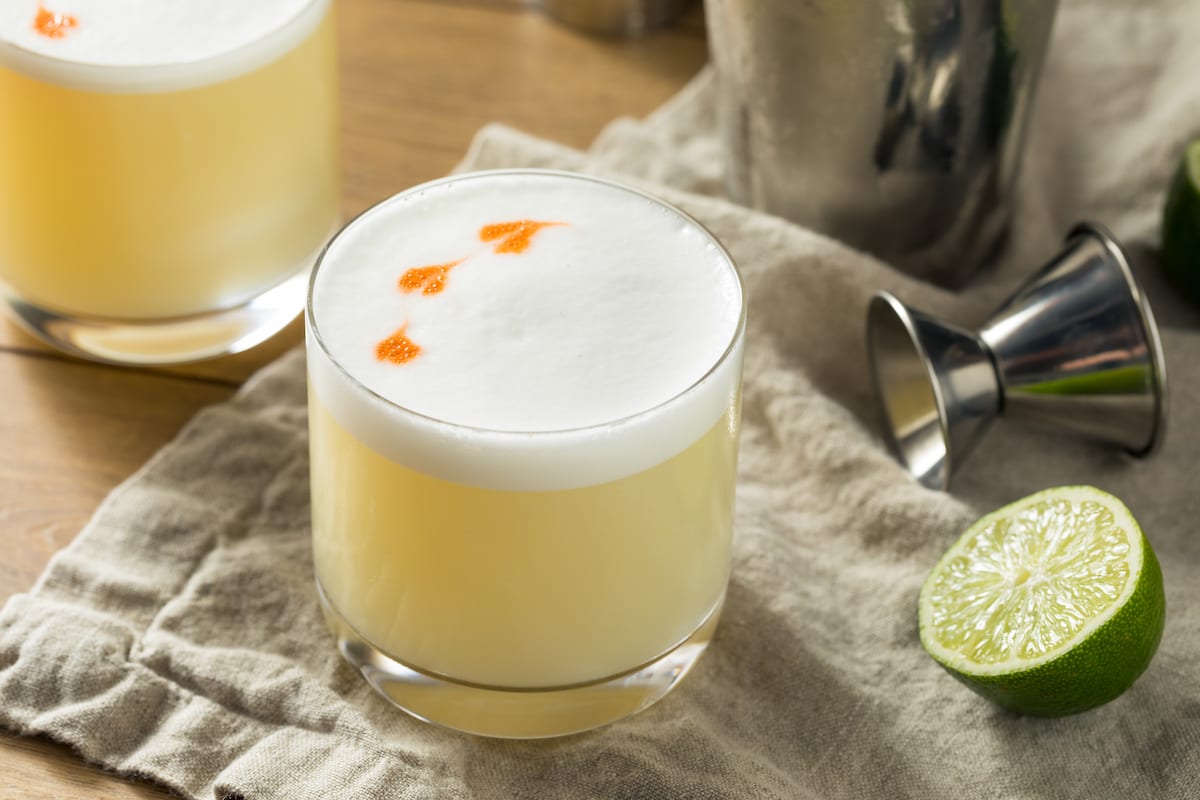 Serving: 1Cocktail | Calories: 220kcal | Carbohydrates: 21g | Protein: 1g | Fat: 1g | Sugar: 16g | Proof: 21.8% vol
Have you tried the cocktail?Share it with us on Instagram by tagging us! @Alcipedia or with the hashtag #Alcipedia!
Share on Facebook Share by e-mail

Tips for the perfect Pisco Sour

The perfect Pisco Sour is a combination of the right ingredients and individual preferences. With the influence of the Pisco and the limes have on the ingredients.

The Pisco as the base of the cocktail gives it its flavor. There are eight different grape varieties from which Pisco is made in Peru.

Depending on the brand, the grape varieties are also processed individually or mixed. This creates a large variety of flavors. The variety most often used for a classic Pisco Sour recipe is the Quebranta grape. It belongs to the non-aromatic grape varieties.

Ripe limes have a more rounded taste and contain more juice. They can be recognized by the fact that they are softer.

The Chilean version of the Pisco Sours uses lemons and contains no egg whites or cocktail bitters.

There are two difficult parts in the preparation: the egg white foam topping and the ice. Ice waters down the drink. A Pisco sour can do without ice if the glass is chilled because the purpose of the ice is only to cool the Pisco. If you don’t feel like chilling the glass beforehand, it’s best to use solid ice cubes.

A strainer is helpful to put the foam on the cocktail.

A way that guarantees the foam is the dry shake. Mix the ingredients without ice first and add ice afterward. Then pour the contents through the strainer into the glass.

The splashes of Angostura Bitters on the foam give it a slightly spicy flavor. The Amargo Chuncho Bitter is of Peruvian origin and gives the cocktail a more authentic touch. There are variations where the cocktail bitters are replaced with cinnamon or nutmeg. A Pisco Sour recipe like that, however, is frowned upon by Peruvians.

The cocktail combines the sourness and freshness of limes with a fruity grape brandy. The sugar syrup adds sweetness to the mixture and the cocktail bitters provide spice, and the egg white gives it a creamy consistency.

The flavor depends on the Pisco used, as its varieties range from strong-aromatic to mild-soft. Depending on the Pisco variety, the cocktail can have an alcohol content of 12% alc/vol at 200 milliliters, which it hides well with its fresh-sweet taste.

How to drink a Pisco sour?

In Peru or Chile, the cocktail is considered a classic apéritif or served as a welcome drink. In Europe, it works perfectly as a refreshing after-work drink on a warm summer evening.

The glass used for the cocktail does not affect its taste. Small glasses that taper downwards are stylish. Round and square, short glasses like tumblers also bring out its appearance.

Where can I buy Pisco?

You can find Pisco in well-stocked liquor stores or specialty shops with products from Chile and Peru, or simply online.

It depends on your personal preference whether you like Peruvian or Chilean Pisco more.

What is certain is that Peruvian Pisco has stricter guidelines regarding its production, while Chilean Pisco is also produced industrially.

Only the aromatic grape varieties are used in the production of Chilean Pisco. The maturation in wooden barrels and the addition of yeasts and water is also allowed. Which makes Chilean Pisco darker and different in flavor.