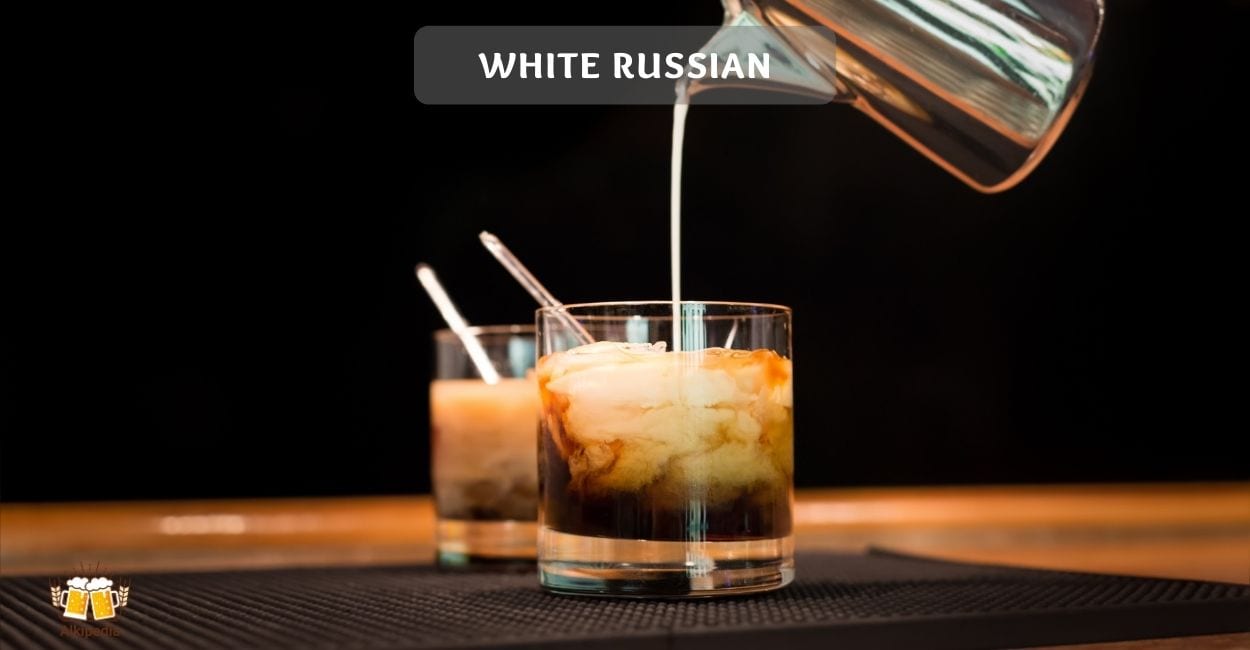 White Russian cocktail recipe — Everything you need to know

Today we have a real classic: A White Russian recipe and everything you need to know about the legendary cocktail. With this, you can learn how to make the classic at home.

Anyone who has seen the popular movie “The Big Lebowski” will probably have noticed the cocktail that plays a big role throughout the flick. The favorite drink of the protagonist Jeffrey “The Dude” Lebowski is nothing other than a White Russian.

The Dude downs one sweet cocktail after another while he hangs out with his buddies. What’s so special about this cocktail, and is it really as tasty as Lebowski would have us believe?

Where does the White Russian Cocktail come from?

The White Russian is supposedly a variation of the Black Russian. The latter was invented as early as the 1950s by Gustave Tops, the bar manager of the Metropole Hotel in Brussels. The White Russian, on the other hand, was first mentioned in 1965.

What does the cocktail actually have to do with Russia? Well, one of the main ingredients is vodka, which is generally associated with Russia. The cocktail is known in the homeland of vodka but is clearly considered to be an American invention.

How do you mix a White Russian?

The Black Russian, on which its “white” brother is based, is made from two parts vodka and one part coffee liqueur. The “White Russian” adds cream, which earned it its nickname. As with most cocktails, there are also numerous variations of the White Russian.

During the cold season, the drink is often prepared with hot coffee. In the summer, you can add vanilla ice cream to make a wonderfully refreshing drink. Many bartenders let their imagination run wild and give the vodka-coffee-cream cocktail a personal touch. So, it can be more than just coffee liqueur and cream.

Add a little Grand Marnier to the mix, and you have a Cherry Orchard — named after the drama by Russian writer Anton Chekhov.

If you use rum instead of vodka, you get a White Cuban; if you replace the cream with chocolate milk, you already have a Dirty Russian. As you can see, you can experiment and mix a White Russian according to your preference.

White Russian recipe: how to do it right

Everything is simple: you only need three ingredients for a White Russian. But this is where the disagreements begin. At least there’s one point all fans of this drink can agree on: vodka and coffee liqueur have to be among the basic ingredients, which can’t be left out. But you can prepare the White Russian with milk, like The Dude, or stick to the original recipe and use liquid cream.

This is where the whipped cream lovers chime in with good arguments. Coffee cream cannot be whipped. But if you use regular whipped cream with a fat content of 30% instead, the White Russian becomes a visual masterpiece.

The mixing ratio of Vodka and coffee liqueur is 2:1. Now take one to two parts of cream, depending on your preference. Your cocktail will be great if you only whip the cream lightly without making it stiff. That way, you put the icing on the cake of your White Russian. This cocktail is drunk from an old-fashioned tumbler with lots of ice.

Some bartenders swear by spices to give the cocktail a fancy twist. Sure, cinnamon, or even a pinch of nutmeg sounds quite good but is still a matter of preference. Just give it a try!

With that in mind, let’s get started on the recipe. 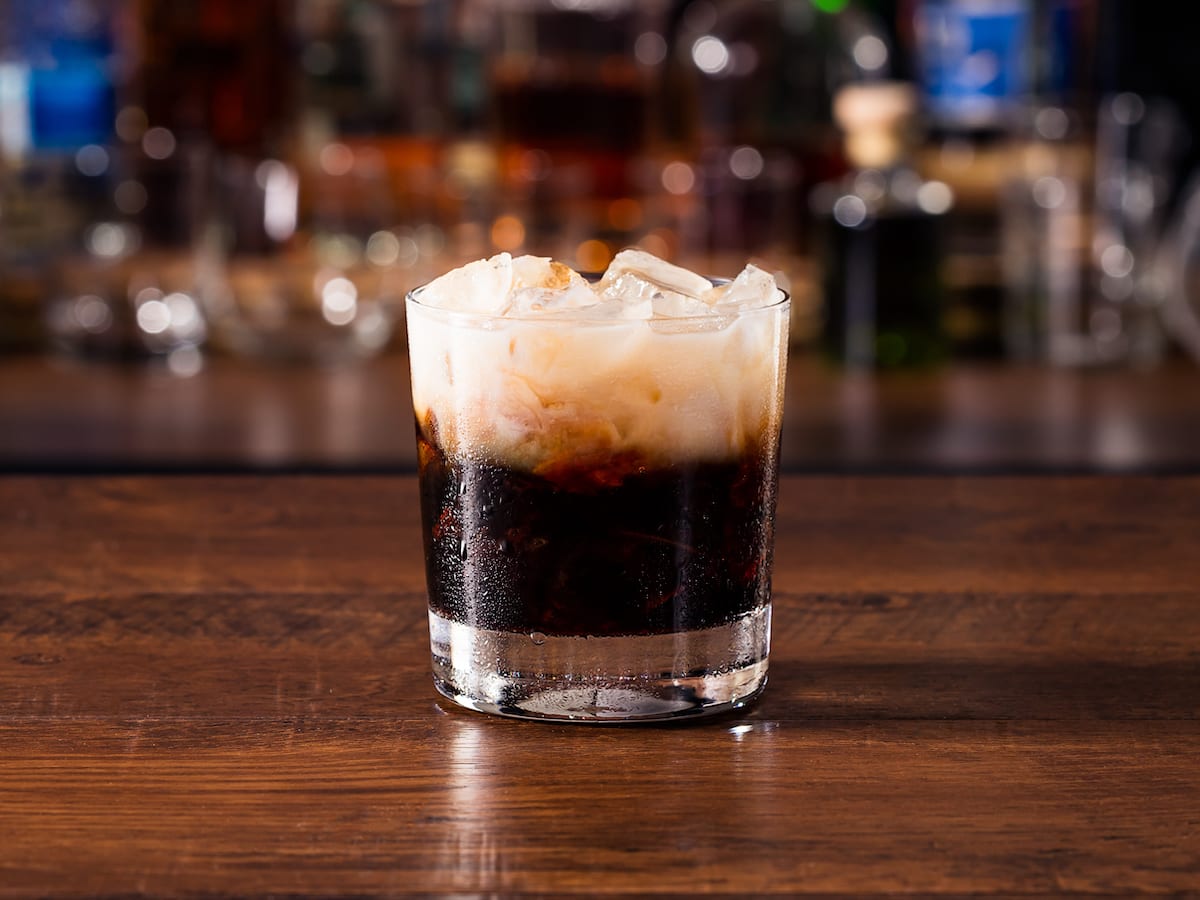 Once you have mixed the vodka with the coffee liqueur, you need to stir in the cream. You have to be a little careful here because the ingredients should form two layers in the glass. This, of course, does not apply when you use coffee cream or milk.

Serving: 1Cocktail | Calories: 37kcal | Carbohydrates: 2g | Protein: 1g | Fat: 2g | Sugar: 1g | Proof: 17.5% vol
Have you tried the cocktail?Share it with us on Instagram by tagging us! @Alcipedia or with the hashtag #Alcipedia!
Share on Facebook Share by e-mail

If you like it fancy, drink your White Russian out of a martini glass. This, however, comes with a little more effort because you have to mix the drink in a shaker beforehand. It might be a good choice for a fancy party, but if your main goal is to enjoy a delicious cocktail, I recommend sticking to a tumbler.

Interesting facts about the White Russian

“The Big Lebowski” is by far not the only movie to feature the iconic cocktail. In the British sitcom “The IT Crowd” Maurice Moss prefers to drink White Russians, as does Lawrence Maddox in “New York for Beginners”. Catwoman, played by Halle Berry, also loves to drink a White Russian but leaves out all ingredients except for the cream.

Which coffee liqueur is best?

There is supposedly an unwritten law that says a White Russian must contain Kahlua. Well, this is also a matter of preference because not everyone likes Kahlua. With that many coffee liqueurs to choose from, you can definitely bring new facets and flavors to your cocktail.

Make your own coffee liqueur.

If you want to add a personal touch, you can even make your own coffee liqueur. For this, you need:

Leon is a food blogger, nutritionist, and passionate cocktail nerd. He loves trying out new cocktails and sharing his creations. Jonas is also one of the founders and part of the editorial team of Alcipedia.com.
Mehr über: Leon Zeschke | Webseite
Post Tags: #Coffee beans#Cream#Ice cubes#Kahlua#vodka
Share:   Facebook Whatsapp E-Mail